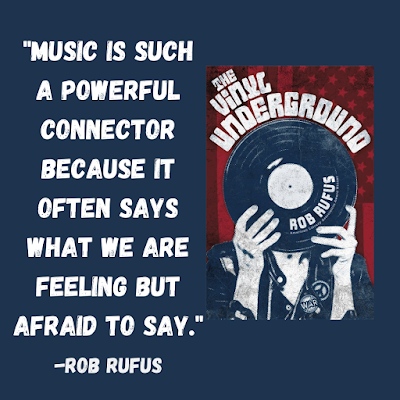 Book Description: During the tumultuous year of 1968, four teens are drawn together: Ronnie Bingham, who is grieving his brother’s death in Vietnam; Milo, Ronnie’s bookish best friend; “Ramrod,” a star athlete who is secretly avoiding the draft; and Hana, the new girl, a half-Japanese badass rock-n-roller whose presence doesn’t sit well with their segregated high school.
The four outcasts find sanctuary in “The Vinyl Underground,” a record club where they spin music, joke, debate, and escape the stifling norms of their small southern town. But Ronnie’s eighteenth birthday is looming. Together, they hatch a plan to keep Ronnie from being drafted. But when a horrific act of racial-charged violence rocks the gang to their core, they decide it’s time for an epic act of rebellion.

Interview with author Rob Rufus.
Samantha: There’s not a lot of YA books about the Vietnam War. What drew you to this era in history and to its music?
Rob: My dad is a Vietnam Vet, so I have always been a little obsessed with the era.  The music. The literature.  All of it.  I believe it is disturbingly relevant to what young people are going through today, and it really sort of disturbs me that more people aren’t seeing the correlation.

Samantha: If your book was a song what music genre would it be?
Rob: Rock-n-roll all the way!

Samantha: I love the unlikely friendships in The Vinyl Underground. How does music connect them (and us) to each other?
Rob: Music is such a powerful connector because it often says what we are feeling but afraid to say.  That’s especially true for young people, who often have trouble expressing their emotions.  Also, it is open to interpretation, which I think allows people from different backgrounds to connect to the same piece of art.

Samantha: If you could put one character ‘on repeat’ who would you choose?
Rob: Hana, for sure. Everyone needs a rock-n-roll badass in their life.

Samantha: Music plays such an important role in your story and in the resolution/conclusion. What is the connection between rock music and rebellion?
Rob: Music has a magical way of stoking you up.  I think it echoes feelings of rebellion and amplifies them, encouraging the listener to raise their voices and fists even louder.  It lets listeners known they aren’t alone in their feelings, anger, etc.  That’s why I think it is the perfect catalyst for changing ideas and ideals, it can be turned up too loud to ignore.

Samantha: Now, for the most important question, which is your favorite song from the book?
Rob: The most important song in the book to me is Eve of Destruction.  It captures how the characters (and country) are feeling at the time, and also captures the feelings in the country right now.  Especially during this pandemic. Give it a spin, it’ll trip you out.

The soundtrack for the book is on Spotify!
Add The Vinyl Underground by Rob Rufus to your Goodreads TBR.

The Girl with the Golden Eyes

September 27, 2021
Hana’s life is forever changed when the Comtesse de Champagne, a wealthy and eccentric Englishwoman, sees a painting of her. The comtesse purchases Hana from her father, and Hana’s existence transforms from one of poverty to one of privilege.   For years Hana enjoys the comforts of her new position, but she hates how controlling and neurotic the comtesse is. When the comtesse is accused of murdering Sir Reginald Shipley over a painting, Hana must do all in her power to prove the comtesse’s innocence or she’ll lose everything.   She reluctantly works with Aaron Shipley, Sir Reginald’s grandson, to track down the true murderer, only to discover shocking secrets that will shake everything Hana and Aaron thought they knew about themselves and their families. And falling in love could prove deadly. Available October 13th, 2021. Preorder now! Discussion Questions
Post a Comment
Read more